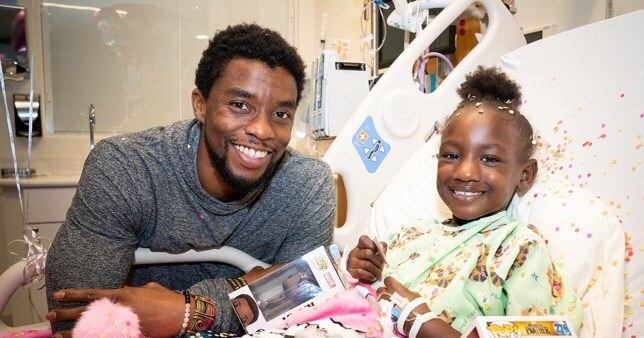 On August 28, 2020, it was confirmed to the world that the beloved actor, Chadwick Boseman, passed away. I think we can all agree that grief and mourning have filled our hearts these past few days, but admiration and inspiration have also nestled themselves between the darker emotions. Chadwick battled colon cancer, an illness invisible from the outside, for four years. He filmed some of the best movies known to man during this time, like "Black Panther" and "Avengers: Endgame." He also visited young cancer patients at St. Jude's Hospital, all while battling cancer of his own.

Chadwick's strength and perseverance should inspire us all. Because his illness was invisible, we had no idea of any internal sufferings he was facing because of the bravery he radiated on the outside.

I've realized that this is something we commonly see from people battling invisible illness — an outer shell of strength, resilience, and bravery that hides the inner battle from the world.

My grandpa faced an invisible illness shortly before he passed, and yet, I never knew the extent of the hurt he faced inside until later on. He kept on laughing, giving, and smiling because he didn't want to burden his family with the battle he was fighting inside. Just like Chadwick, he showed us strength and bravery, even though we didn't know just how much strength and bravery was required to make an invisible illness even more invisible. The strength to keep working, smiling, and loving, despite any suffering, is a strength unlike any other.

After hearing of the passing of Chadwick Boseman, I realized there is a lot that people often forget about invisible illnesses and should be reminded of, in case anyone in their own life is going through a similar battle.

1. Just because you can't physically see someone's suffering does not mean it's not there.

Chadwick lived a remarkable life, even during the past four years, and no one ever suspected he was ill. However, that doesn't change the fact that he was. I think it's important to remember that, no matter what the illness is, just because you cannot see someone's pain does not mean they are not battling something internally. Be there for people. They may need a shoulder to lean on, even if you don't realize it.

2. If you try to make plans, and they decline, respect their decision.

Whether or not you know this person is battling an invisible illness, you should be respecting their decision. Most of the time, no matter how close we are to someone, we don't really know everything they are facing on the inside. Especially if we cannot see it from the outside. If someone says they don't want to hang out, respect that. If they are suffering from an invisible illness, they may be feeling unwell but not want to tell you. Believe them (even though you probably can't see what they're feeling), ask if there's anything you can do, and show them respect by letting them rest.

3. Remember, someone's illness is not their identity.

This is so important to remember, and something Chadwick's battle clearly reminded us of. As aforementioned, he lived a remarkable life in the past four years. He filmed multiple movies, went to red carpet events, and visited young cancer patients at St. Jude's. He did phenomenal things, and his illness didn't hold him back.

The same can be said for my grandpa, too. He kept living his life to the fullest, as much as possible, each and every day. And while we recognized the battle he was facing internally, we also recognized the happiness he exuded.

4. Check-in with people, but don't offer advice about something you don't really understand.

"How are you doing?"

As simple as that — a quick check-in that doesn't make the person feel like their identity revolves around their illness but allows them a chance to talk and feel loved. Showing you love and care is one of the best ways to be there for someone facing an internal illness. I know nothing made my grandpa happier than receiving a phone call from his grandkids.

5. Don't ever take someone for granted.

I think the most important thing Chadwick's battle reminds us of invisible illnesses is to not take anyone for granted. Just because someone is carrying on in their day-to-day life and looks perfectly healthy does not mean they are.

I never once took my grandpa for granted, and still, I wish I could give him one more hug. An invisible illness took my grandpa, Chadwick, and many others, even though these people looked healthy and happy on the outside. Life is so important and so precious, and we must never take it for granted.

UI/UX designer, with a huge passion for Sushi

How to become an Influencer

Let’s Get in Touch

Magazine advertising is the most versatile, but this is solely dependent on the size of your ad and how many other ads.

sales@gofurtheronline.com
Thank you! Your submission has been received!
Oops! Something went wrong while submitting the form.

Everything about marketing that's on point

Stay up to date with the latest trends happening in the digital world.

Even though we cannot always see the battles people are facing, it doesn't mean they aren't there.
Social

How to become an Influencer

A micro influencer is a smaller influencer – someone that has the power to drive buyer behavior, to make a big impact on the fortunes of a brand simply through an endorsement, and that is able to build support for a movement or an idea.
Social

How to become an Influencer - EBOOK

Is that really the only thing that can come from your hard work? The truth is that working online creates a huge number of opportunities and one of the very biggest is to become an influencer.
Marketing

Copyright Online and Fair Use in Social Media

With the online world being dominated by images, what do you need to know as a business owner when it comes to copyright laws?
SEO

Service and providing potential clients and customers with testimonials is one of the best ways to market.